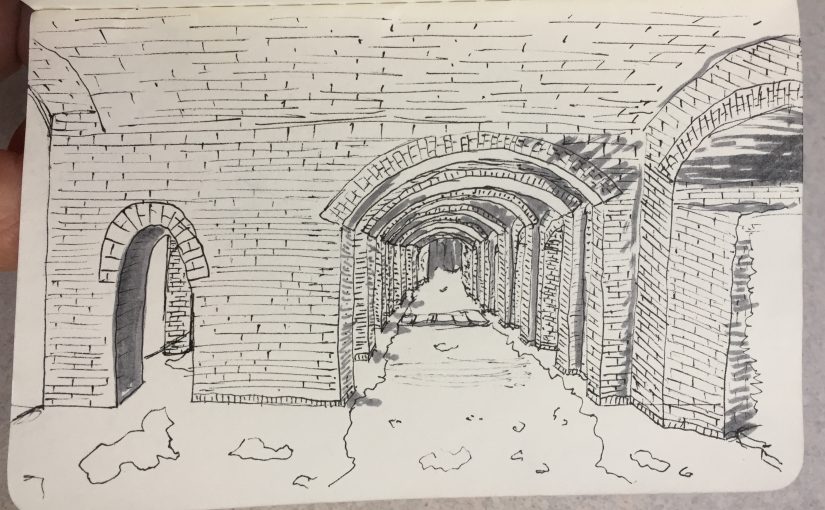 While in Florida, we left the RV at a campground in the Everglades and motorcycled down the Keys to Key West. There we caught the Yankee Freedom ferry out to Dry Tortugas National Park, where we camped for three nights. Fort Jackson was a lot of fun to explore, the key (island) was gorgeous, and we just had an absolute blast!

I brought along some watercolor paper, a new mini moleskine sketchbook, and a handful of pens and paints. Everywhere you turned the view was stunning and I had a lot of fun sketching and even worked on a couple of paintings.

There was a tour every day, explaining some of the fort’s history and design/construction details. We caught the second half of a tour one day and I sketched the first three images while we were stopped, listening. After the tour was over I came back and added some details and shading.

Inside the fort, with a powder-storage building on the left. You can see a cannon up at the top left section of the wall. 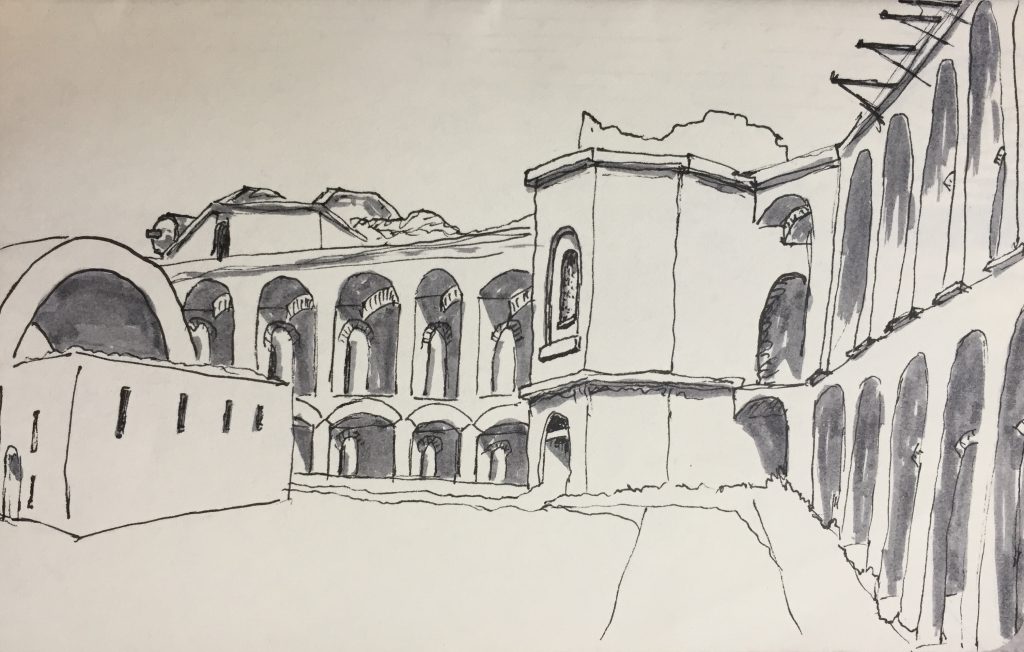 Up on the second floor, looking down the hallway. The arches were fascinating, and made gorgeous patterns. (I added all of the brickwork that night by flashlight).

The final stop of the tour was up on the third level, looking down toward the front of the fort (just to the right of the lighthouse). 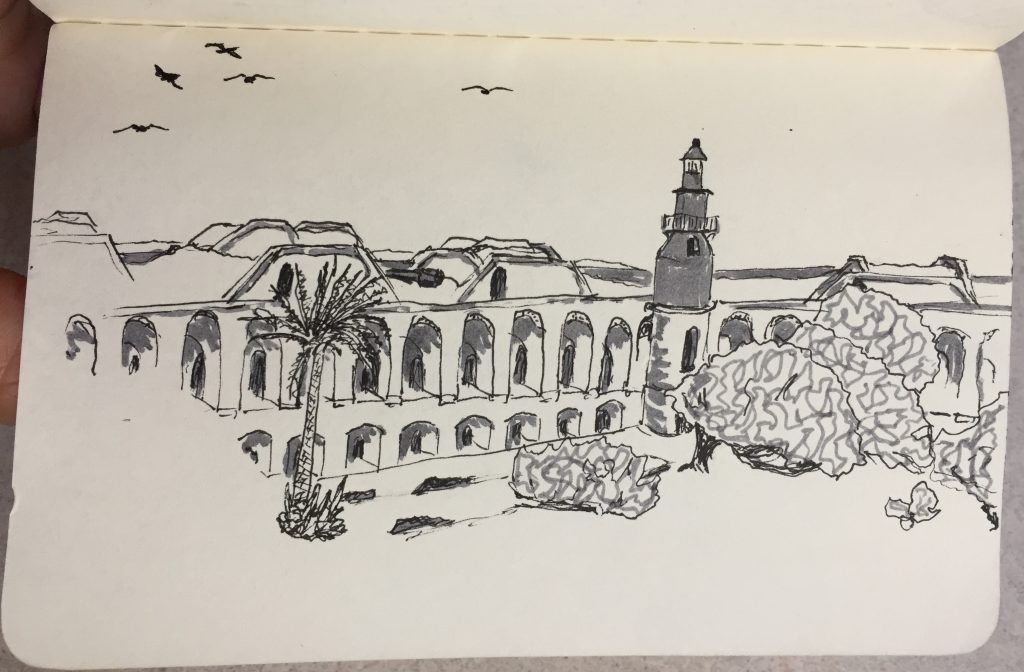 There are three ways to visit the island: the ferry we took, by private boat, or via seaplanes. These guys came in three times a day, dropping off visitors. You can see the chain of keys off in the background, behind the landed plane. 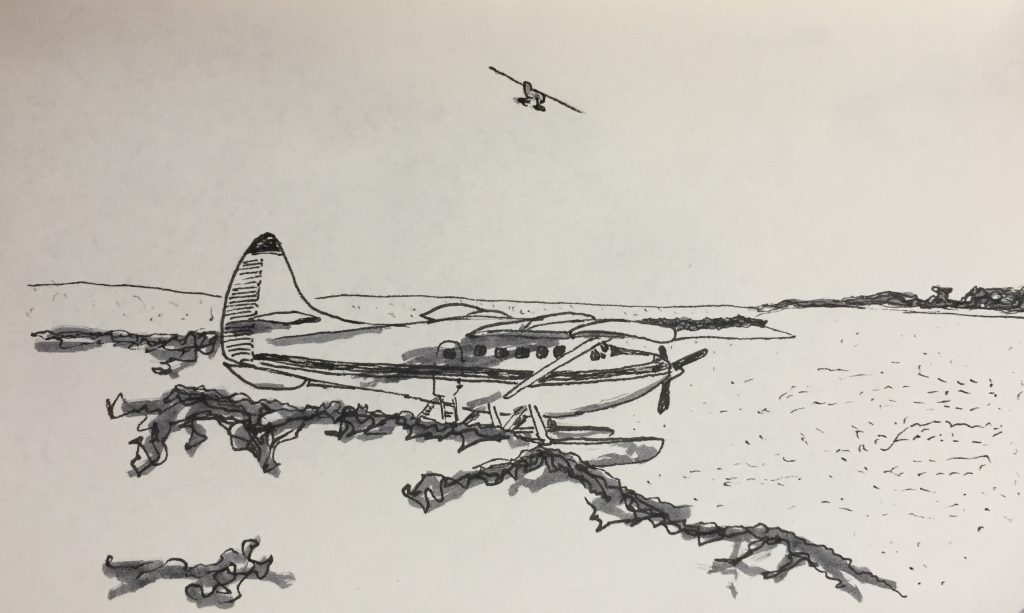 We walked the moat/sea wall at least a dozen times every day. Between the amazing colors of the water, the views of the fort itself, and the array of sea-life visible from above there was always something new to see. 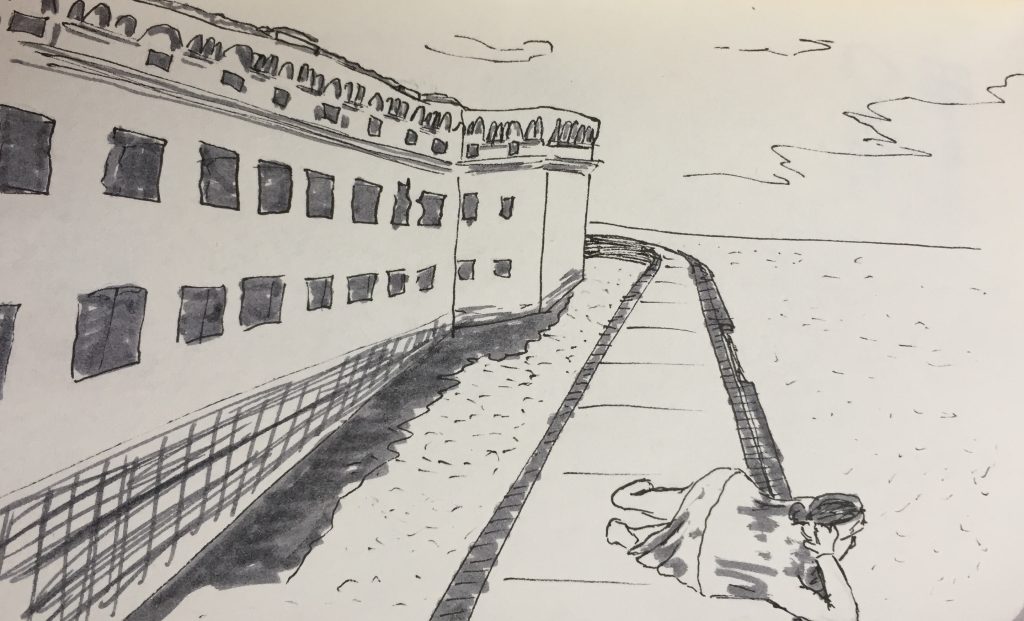 These conch shells, down inside the moat, had hermit crabs living inside them – moving about less than an inch at a time. 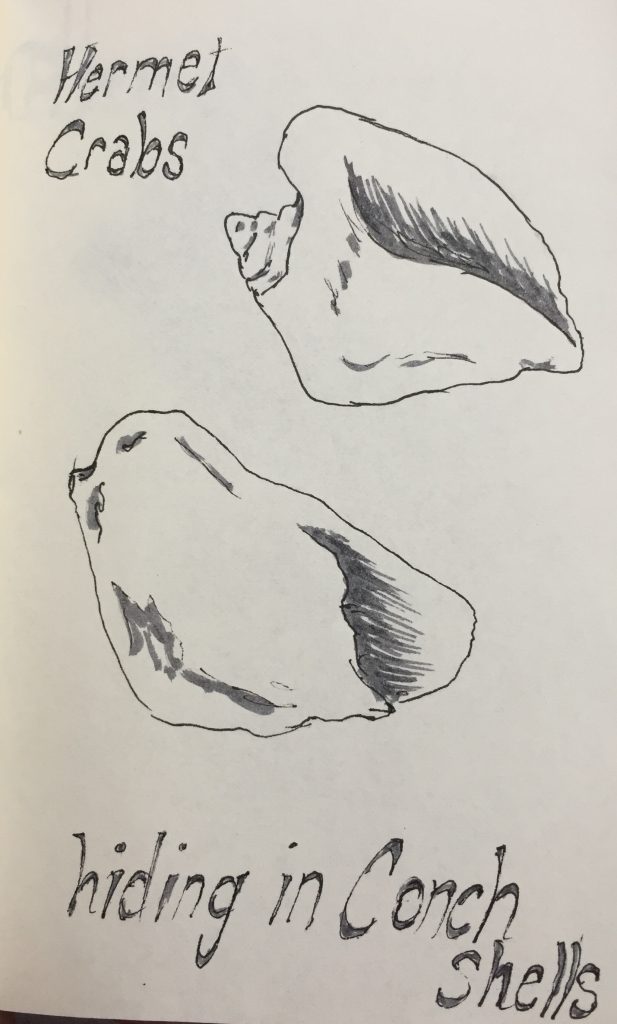 One night it really rained. A couple of campers’ tents didn’t survive and they had to find somewhere else to sleep for the evening. Ours held up just fine, but it was still raining when we woke. I headed into the fort (which opens/closes with the sunrise/set) to stay out of the rain and spent a wonderful morning sketching and painting. Here’s a view of the bridge, the only entrance into the fort, and the old pilings for the coal storage, the current helicopter pad, and the hammock of trees where the tents are set up. 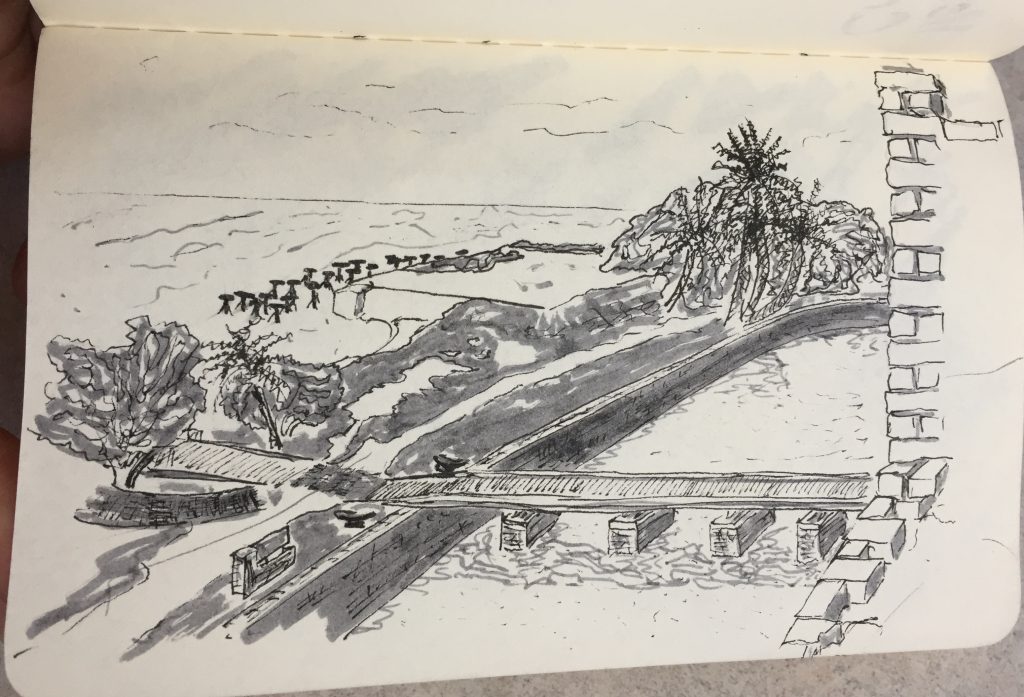 There were so many amazing things underneath the water. I tried to sketch them while walking along the moat wall but couldn’t quite capture the sensation of looking down into the water. 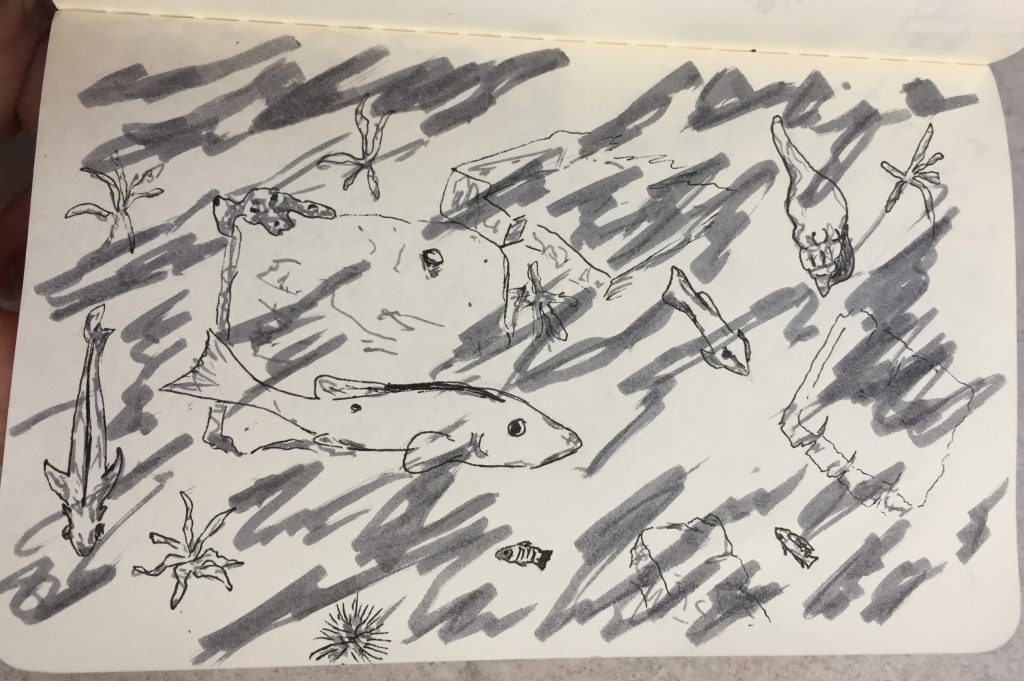 One of our favorite parts of the fort was that the moat had an actual crocodile living in it! Carlos apparently blew in with a hurricane about 12 years ago and has been living there ever since. One morning we spotted him directly below us while up on the second floor of the fort and I sketched out this view. I got to see him reach up out of the water and snap a bird down from its perch a few inches up the fort wall on our first day. 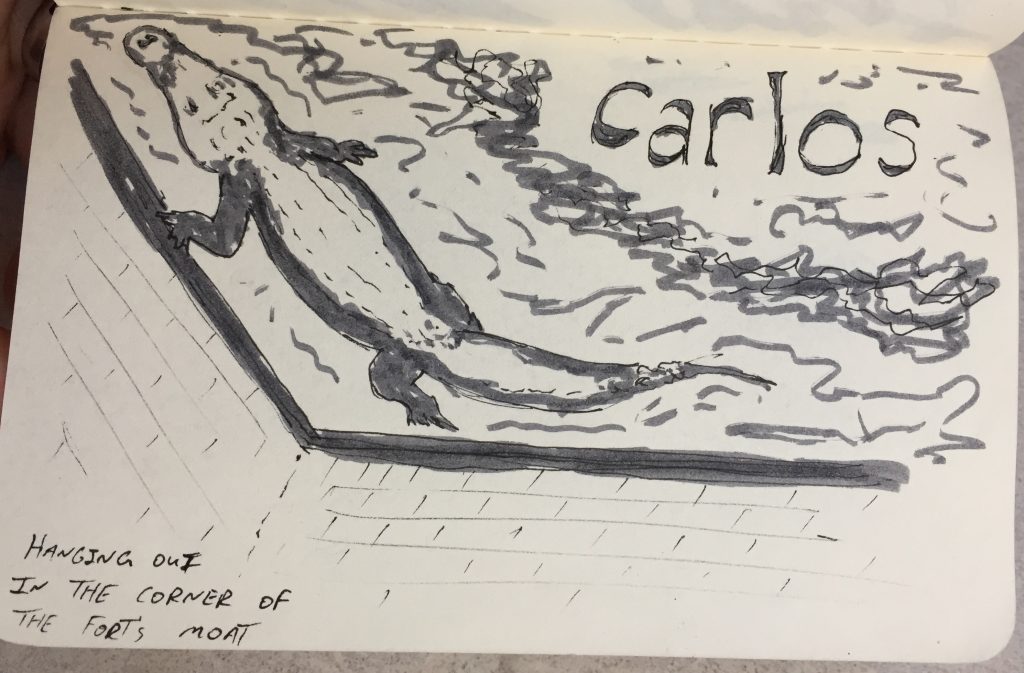 Since we only caught the second half of the tour, we joined in another day for the first half. Here’s the sallyport (entrance) to the fort while catching up. 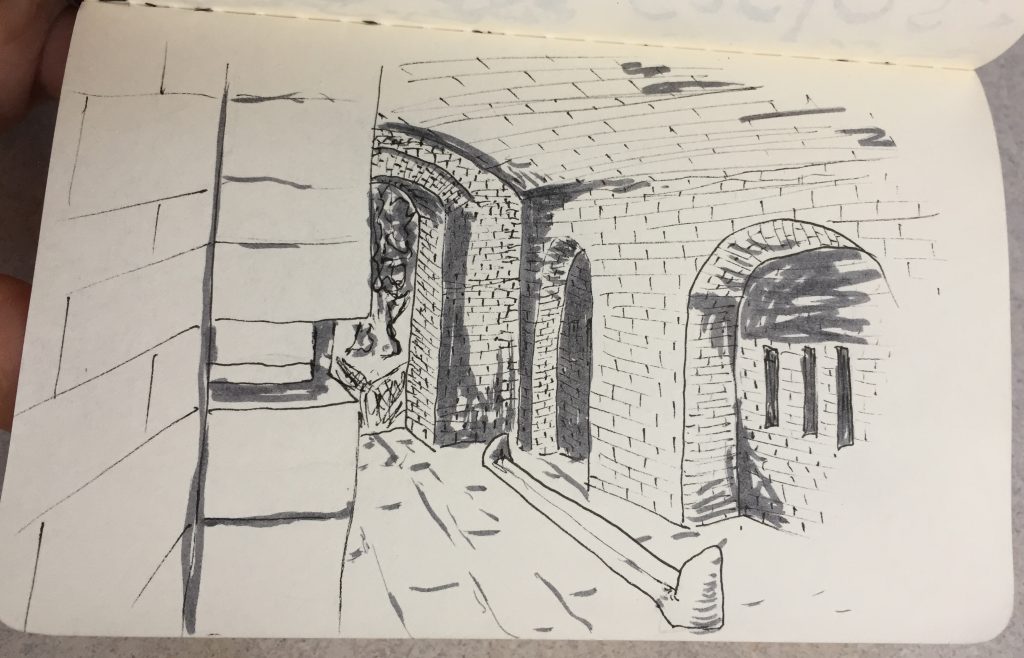 It was so fascinating to watch the birds about the island. The pelicans were fun to watch. We tried to guess when they would suddenly dive into the water after soaring above it. Way more fun, and more interesting, than we thought they would be. Here are a few captured while at the dock. 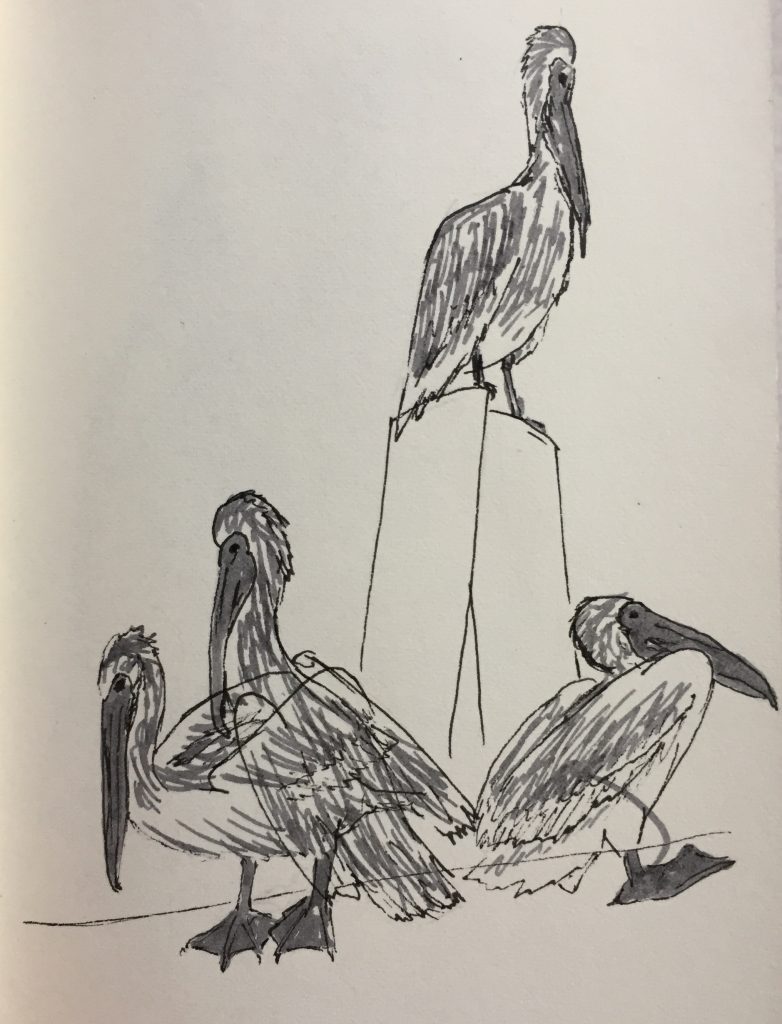 We also watched quite a few herons. They didn’t seem to like the pelicans when they got too close, and it appeared mutual. 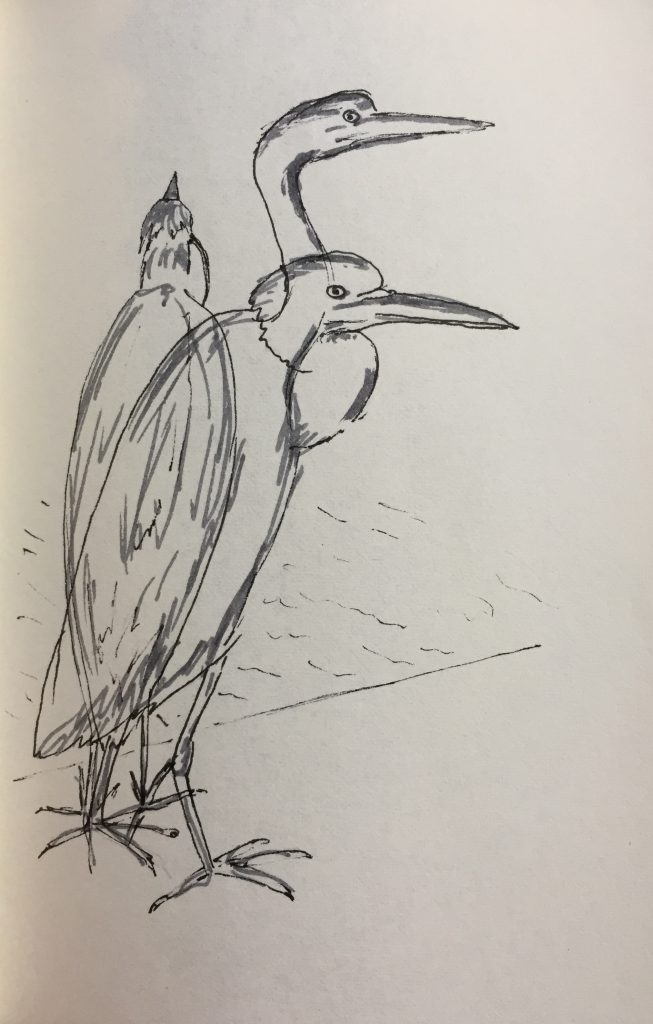 The sunrises and sunsets were spectacular. I couldn’t quite capture this sunset in shades of black and white, but thought it was worth trying. From the bottom, the water with patches of lighter blue, a wall of clouds that set on the horizon, then the colored sky with silhouetted cottony clouds, and then a whispy cap of cloud cover over all. The next morning I quickly sketched out the fort silhouetted by the rising sun. Someone happened to be walking out the sallyport with a flashlight at the moment, illuminating the entrance and bridge. 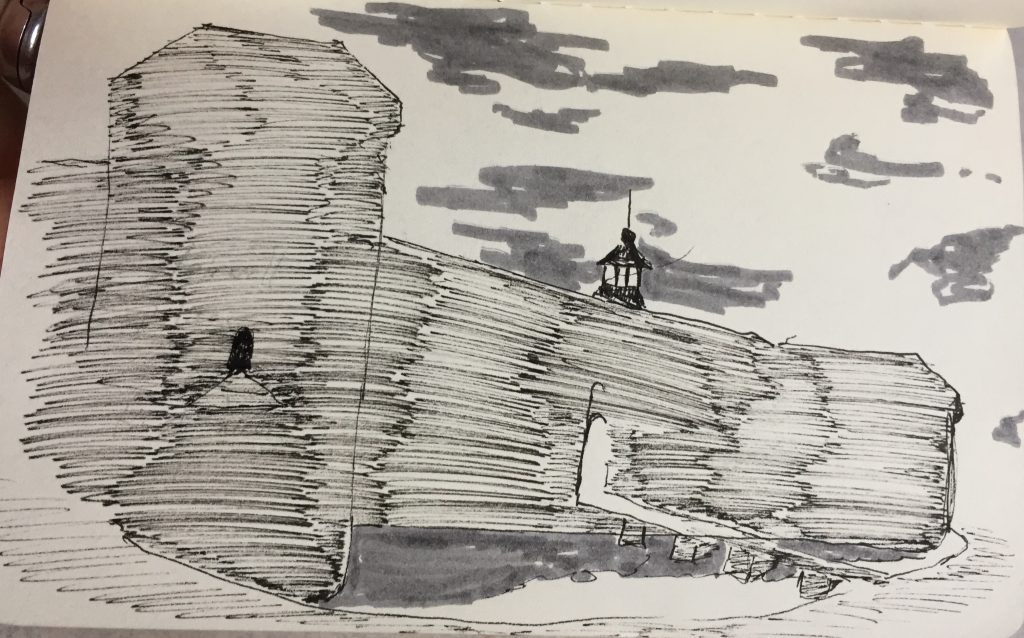 Next to our tent we had two hermit crab concentrations. There must have been hundreds just around our tent and thousands on the island as a whole. In the evening/night you really had to pay attention to where you stepped. 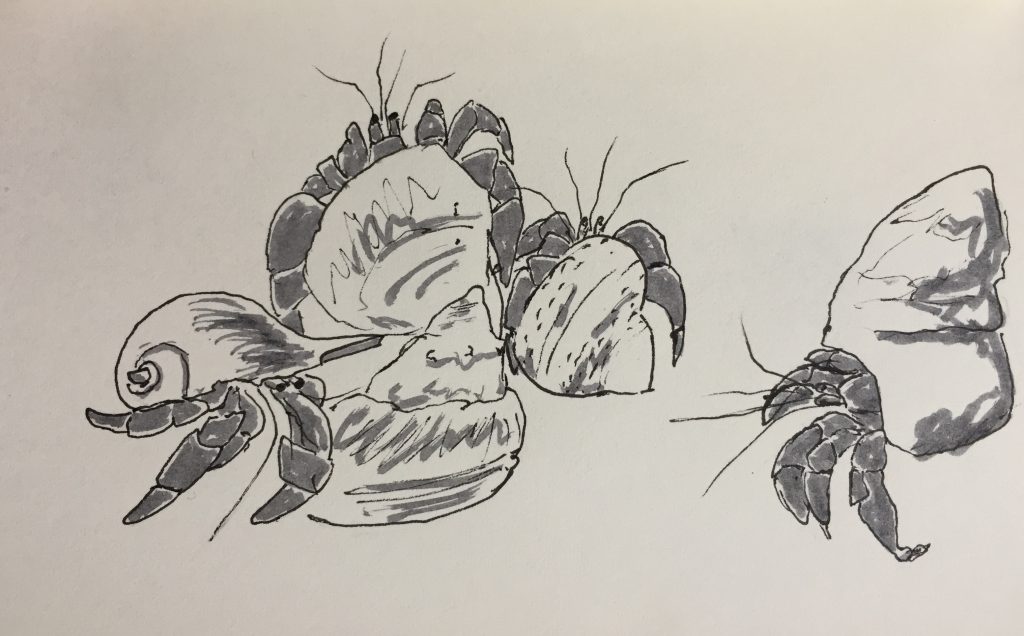 Each corner of the fort had spiral staircases leading to the upper floors. On our final morning I found a comfortable seat and sketched out the beginning of the stairwell from the ground-floor. 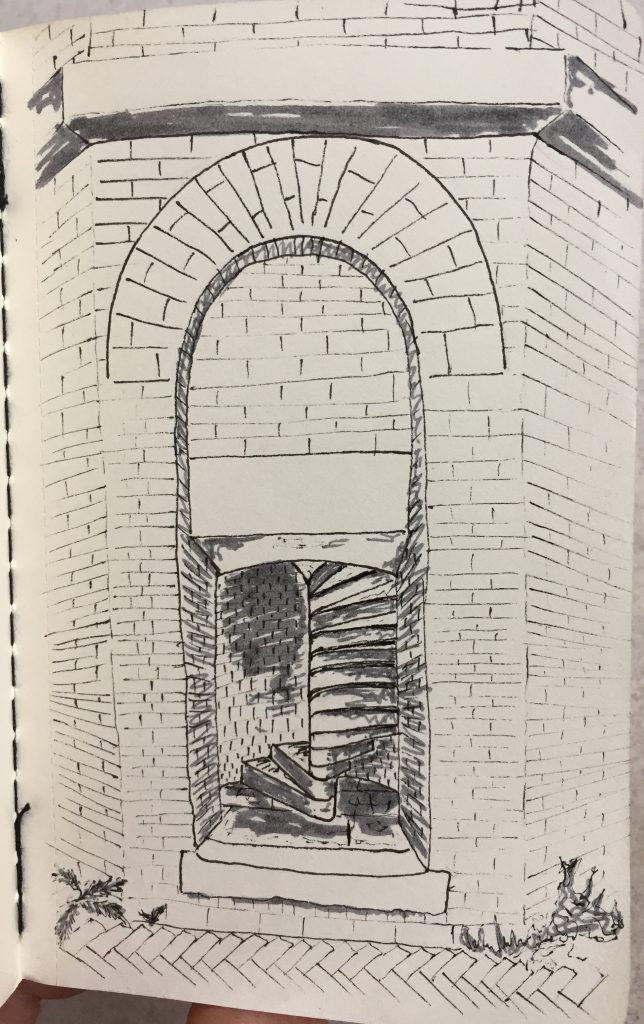 In our last hour, while taking some photographs from the roof of the fort, I quickly sketched this rotating cannon while walking. On the ferry back to Key West I added details and shading. 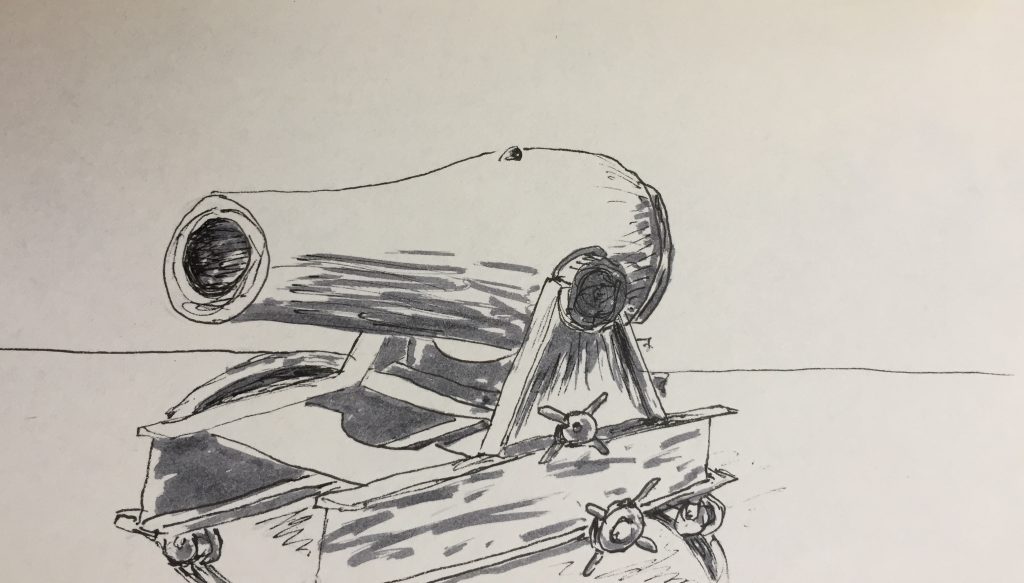 On the ferry, waiting to depart I sketched the lighthouse in pencil. Along the ride I inked the image, added shading and details. So I blame any lopsidedness on the boat’s motion. 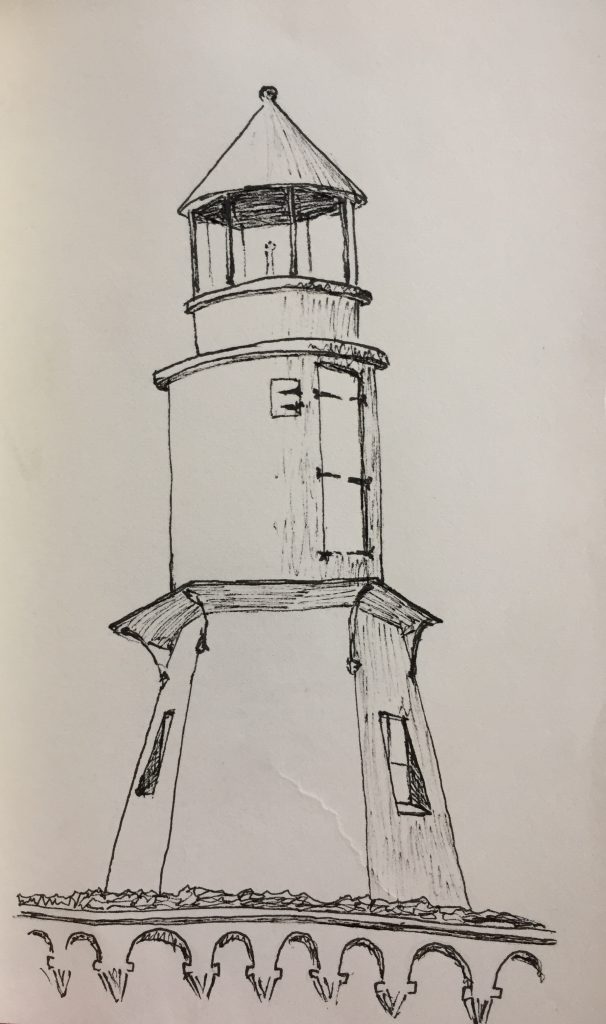 With the lighthouse finished and more than an hour to go, I sketched fellow passengers. 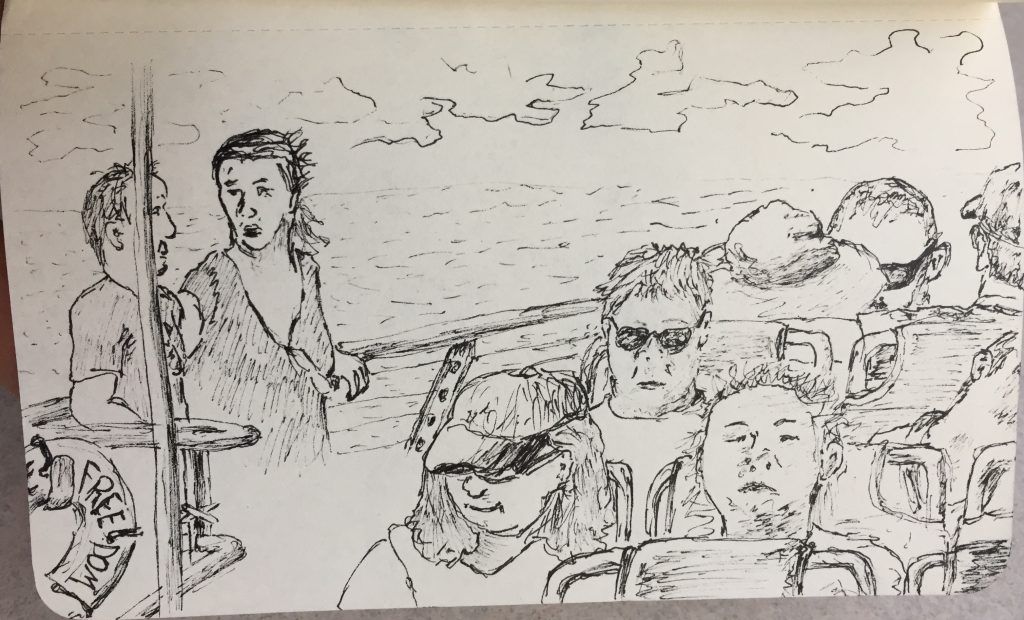 What an amazing trip! We absolutely loved it and highly recommend an overnight trip to Dry Tortugas!

(Here are the paintings done while visiting.)